The guys over at jabber.org are moving servers, and upgrading their software. However, it does not seem to work well. They mention the need to adjust settings for iChat and Kopete. However my IM+ does not work anymore either, Licq’s pre-alpha jabber Plugin also crashes (however erijo seems to be working on a fix), and Adium also chokes, and will connect only every couple of hours. It seems they should have done a bit more testing before!

I am currently trying out Apple’s Mobile Me service, which is free in the first two months. It seems relatively nice, but has some drawbacks. On the plus side, you get 20 GB of storage space, or 40 GB for the family pack. Also you can track your iPhone if you lose it. The mail service is useful, but on the downside: It does not support server side filtering! That’s a great, great bummer. Also it does not seem to support Apple’s notion of filtering, called “intelligent mailboxes”. If that were supported on the server, I would ditch my GMX ProMail account, and switch to using Mobile Me for mail services.

In Python I sometimes want to make a dictionary of lists. So usually I would write something like:

This however will not work, if somekey did not exist so far, because it will raise an exception. But there is help! You can use a collection:

Here is a minimal example for PyQt4, to set up a main window and connect a simple action to some slot. The documentation on doing this is sparse to say the least. So I hope this is helpful for anyone trying something similar. I assume that you have created a ui_MainWindow.ui file with Qt Designer, which contains a form derived from QMainWindow.

I really don’t get happy with Qt 4.6 on OS X 10.6. Nokia rates Qt on that platform as Tier 2. Which means, it is not fully supported. This results in stupid things happening. With Licq, I currently have the problem that the whole program crashes with the following message:

+[NSUndoManager(NSInternal) _endTopLevelGroupings] is only safe to invoke on the main thread.
The problem here is that Qt 4.6 for 64 Bit is (rightly so) built using the Cocoa API, instead of the C-only Carbon API. Now it seems that Qt uses the NSUndoManager, which in turn has an undocumented (?) function _endTopLevelGroupings. And as the above mentioned message tells you, it is only safe to call that function from the main thread. Since the qt4-gui plugin of Licq runs in a separate thread, this assertion fails, and the whole program crashes. So this basically means you cannot start up your GUI from a secondary thread with Cocoa based Qt. This, I think, constitutes a bug in Qt.
Update: I submitted a bug tracker item, and erijo is producing a minimal example that will hopefully show the bug in action. Now let’s wait and see.

Good news: The Qt port of MacPorts is working again. The port was upgraded to Qt 4.6 and now it compiles again. Now all I need is a 64 bit CUDA package for Snow Leopard, and I’ll be happy.

This allows you to convert any preprocessor macro value to a string, e.g. for printing.

Since several people asked me how to do this, after I twittered about this, here it comes: How to correctly sync the Google Calendar with the iPhone. First step is to create a new calendar account in the iPhone settings (Email, Calendar, Contacts) using the Exchange protocol. The finished account should look something like this: 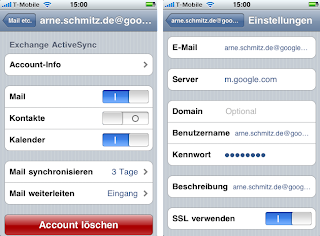 You can also sync the contacts and emails, if you want, but that’s optional. The second step is to go to http://m.google.com/sync/ to set up which of your google calendars you are going to sync. Beware: on the german iPhones, the page will display an error message, unless you switch to the english page! 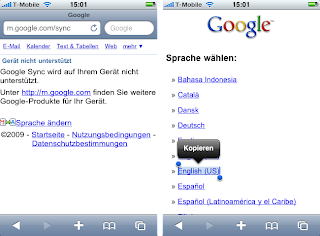 That seems to be a bug on google’s page. So after you’ve done this, you get a list of your iPhones and can select for each device which calendars to sync: 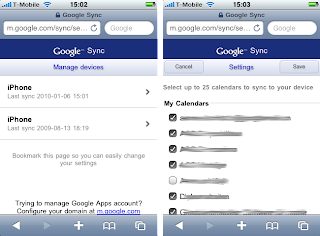 I am using the try-out version of Mobile Me for the iPhone. Syncing the device with the Macbook Pro. Whenever I go to my address book, all the contacts appear twice. Very strange, I though, until I noticed that I was in the Group “All contacts”, which will show the contacts synced from the Mac and from Mobile Me. What a stupid way to present things. Right now, I just need to switch to “All contacts from my Mac” to fix this, but when I were to add another address book (say a corporate one or the Google one), I would be in trouble. Not very clever, Apple…

Oh dear, Nokia and Macports do seem to hate me. I’ve spent half a day to get some version of Qt running on OS X 10.6.2. The problem is as follows. Nokia only provides 32 bit builds of their Qt SDK for OS X (universal binaries for PPC and i386) as can be seen here and here. Under OS X 10.5 this was no problem, since the whole system was basically 32 bit. But Snow Leopard now builds for x86_64 per default. Especially when using Macports. So I thought, lets just install the qt4-mac port from Macports. Wrong again! That port is currently broken. So, my project depends half on Qt and half on stuff from Macports. Now neither one is in a usable state. Ok, so I thought maybe I can force Macports to build in i386 mode only, to be compatible again with Qt. So I edited /opt/local/etc/macports.conf, cleaned the whole Macports tree and reinstalled. Fail again. This time, perl5 fails to build. That port is broken on 10.6 for non 64 bit builds. Hooray. Well, I give up for today, but will continue to investigate and will report back, as soon as either Nokia provides a decent 64 bit build, or Macports recovers and fixes any of their build issues.