Even after more than 15 years of Linux experience, I sometimes learn new stuff. Today, I figured out why my KDE goes haywire sometimes. It turns out, that my swap file was mounted as /dev/sda1. Which is fine, most of the time. Except when an external USB drive is plugged in. Then that one becomes sda, and the internal drives goes to sdb or even sdc, when two external drives are plugged in. So the swap won’t work, and the USB drive cannot be mounted via dBus / HAL, since it is suddenly listed in the /etc/fstab. Also, KDE will have some strange troubles during this time, and will not restore my session. But I am not 100% sure this is related. Time will tell… Anyway, what was strange was, that everything else worked. That was because the root filesystem was mounted using a UUID, which identifies a partition or volume uniquely. So, why did the swap not have this? Seems, this was forgotten by Ubuntu upon the upgrade to Maverick. But the Ubuntu Wiki helps. So what I did was:
# swapoff /dev/sda1
# MYUUID=$(uuidgen)
# mkswap -U $MYUUID
# sed “s//dev/sda1/UUID=$MYUUID/”
# swapon /dev/sda1
You can also just edit fstab with the editor of your choice…

There is an article over at Slashdot about the possible decline of the traditional hard disk. We now have tablets like the iPad and its clones having only solid state / flash memory, and the new MacBook Air reaching a price point which is a direct competition to Apple’s entry level MacBook. This really might be a sign for solid state storage to have reached the ordinary customer, outside of MP3 players, cameras and smartphones. The discussion on Slashdot is erratic and irrational, as usual, but some interesting points are also made. The thing those people are missing though is: This is again another Apple strategy. Apple can allow to enter a mass market first. They have loads of money, their products are still priced at the high point. They don’t compete with the low level market. So offering a 11.6″ laptop with a meagre 64 GiB of storage is doable for Apple. Sure, most geeks will say: What a puny machine! But again, as with the iPad, Apple can drive markets that don’t care about computing power and loads of disk storage: Your mom, my mom and millions of other people might be happy with such a machine, that only 5 years ago would have been more computer than you’d ever needed. In a significantly larger form factor.
And in 5 years you probably won’t see any laptop with a spinning drive anymore. Apple is just very early to the game, as usual. Remember the floppy-less iMac? They never were the first, but they were always quick to pick up and set trends. Also, what most geeks at Slashdot don’t understand: Yes, Apple is fashion. Apples is expensive. But that’s exactly why their product sell. Is it a good thing? Probably not. But that’s how the market works: fashion sells. Also their laptops are incredibly well manufactured, in my opinion. Not without flaws, but much better than most devices I held in my hand.

Currently travelling with the german ICE train. The iPhone is plugged in, and I notice the following: the touch events are noisy and jittered. Unplug: all ok. Plug in again: flaky. I guess the 230V line here is of very low quality. I am using the Apple transformer, by the way.

When trying to downgrade an iPad from 4.2beta to 3.2.2 directly via iTunes, I just get a non-descript error message. However, there is a nice howto out there, which describes this.

An absolutely cute 2D, very classic jump and run game is Frogatto and Friends. It is for free, comes even with source code. Only the iPhone version does cost a bit. But I guess that is a nice way to support the developers. The game is crossplatform, running on Linux, OS X, Windows and, as mentioned, iOS devices. I assume, if you take the source, you can make it run on several other platforms as well. The music is nice, the characters lovable, and the levels have a great amount of detail. Controls are simple: cursor keys, plus A and S is all you need. What surprised me was that the music is stored as .ogg files, although it sounds like tracker songs. Thus it makes up 90 MiB of the game data, the whole game being slightly over 100 MB in size. Anyway, download it and have fun! 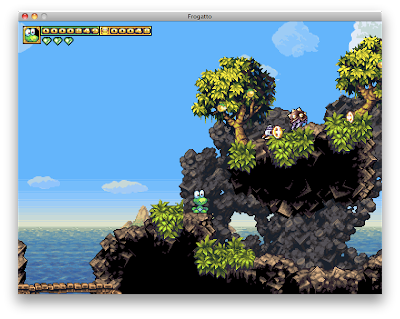 …it’s buggy. I tried the snapshot, but that behaves strange as well. My workaround so far is to go fullscreen. Still, customize is broken: the customization buffer shows up in the wrong buffer. I haven’t found a bug description for that yet. Also, the git interface does not work. I will install magit next, to see if that helps. Anyway: Emacs on (K) Ubuntu is in bad shape…
Update: I fixed the first two problems. Turns out, emacs-snapshot does work, I just forgot to de-install emacs23-gtk and install emacs-snapshot-gtk. Thus I still fired up the old version. Customize works as well now, after uninstalling cedet and ecb, and instead using the latest ecb and cedet from Sourceforge. The versions shipping with Kubuntu are slightly out of date and were causing the buffer problem.