The infamous Tivoli Storage Manager client (a.k.a. dsmc) uses two configuration files: dsm.sys for the system wide configuration, specifying which directories to backup and so on, and the dsm.opt for the backup/restore client. The problem is, if you specify the backup SERVERNAME in both files, this will lead to problems, if they are not the same. So, e.g. I misconfigured the dsm.opt via the dsmj wizard, and had “SERVERNAME myhost” in the dsm.opt, while the dsm.sys said “SERVERNAME something.at.rwth-aachen.de”. The first entry obviously was complete bull, and confused the dsmc, so that it answered “ANS1217E Server name not found in System Options File”. Aligning both entries to the correct, real server name solves this problem.

I just tried to download a couple of images from my iPhone, using iPhoto ’08. No luck. Suddenly the iPhone was not listed anymore in iPhoto! It turned out that something on the iPhone was broken / corrupt. When I looked at the device using the Image Capture program, I got this: 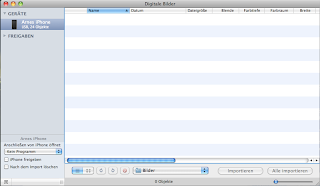 As you can see the devices section lists 24 images on the phone, but the photo list is empty. Deleting the pictures on the device restored the functionality. If you need the photos badly, you can forward them to your email or MobileMe account, and then delete them.
Sometimes it is so much better to just have a plain filesystem with photos, instead of some advanced database, that might break…

I am working on a C++ project which is organized such that source files (*.cc) are in some subdir called, let’s say, project/dir1/, and header files (*.h) in a directory called project/include/. Now Emacs has a function called ff-find-other-file, which is able to switch between header and implementation of C/C++ files. If you take a look at the source of this function, you will find another function called ff-get-file-name, which tries the following: first, it looks for already visited buffers, if they contain the appropriate file. Then it will search a certain set of directories, if they contain the file. Last, it will ask to find or create the file in a user specified directory. However, in my case, although both files are already being visited by buffers, the first test (finding the file in already loaded buffers) fails. Actually the offending piece of code looks like this:

The problem is that this always fails, and found will always be nil. The filename constructed is not being expanded, as get-file-buffer demands. However, expanding it is useless, since the exact expansion (absolute path) of the searched file is not exactly known! However, you can rework these lines to just look for a buffer whose name matches the file you are looking for:

Note that this will only do a simple string matching. It might happen that for a certain file foo.cc you have to buffers visiting some foo.h. The function will only find the first one. But in my opinion, there is not simple solution to find the semantically correct header file, anyway. So this is still better than the broken solution in Emacs.

I am still waiting for 64 bit CUDA support for OS X 10.6. As this thread indicates, we might have to wait for a while so far. Maybe I will switch to OpenCL in the meantime? 🙂

Someone else already solved it. I say thanks!

I wanted to make a Makefile for a seminar report. This report contains all the sub-reports of the students. So the Makefile needs to recurse into subdirectories to compile all the contained LaTeX files there. So, given a file reports.tex which will include some PDFs in subdirectories 00/ to 10/, we get a Makefile that looks like this: