If you are using VirtualBox for running servers, you might have stumbled across the question: How do I backup a running virtual machine? The problem is, that the machine state, consisting of the hardware state and especially the virtual harddisk, might change during the backup. This means that you will most probably end up with an inconsistent machine state, from which you might not be able to recover, after restoring the machine from your backup.
So I thought up a little script that creates a static machine state that can be backed up, while the vbox continues to run on a current, changing machine state.
Requirements: two states named current and previous (you have to add them manually first), where “current” is the current vbox snapshot, which the machine is running on. The script will move the current state to the name “previous”, and delete the old “previous” state. It will then take a new “current” snapshot.
The previous snapshot (.vmdk and .sav) together with the main .vmdk or .vdi can then be used for backup purposes.
So it’s a good idea to run this script before your daily backup run. The snapshots take only some seconds. Deleting the old snapshot might take a bit longer, because the deleted machine state is committed back to the main machine state.
Note that your backup software will fail to backup the current snapshot correctly. However, since vbox generates random IDs for the states, it is not easy to exclude the file from the backup set. So just ignore error messages from your backup software concerning that particular state file. This way you will have a machine state that lags only some minutes compared to your backup system. 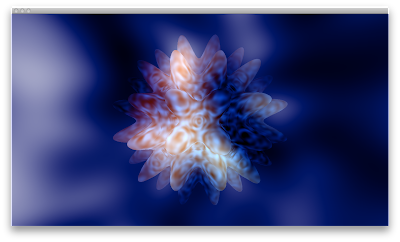 Well, the MobileMe gallery upload seems to only like Mac browsers. I have only my SuSE box here, so I tried to upload using Chrom 5.0 and Firefox 3.5. No luck. Both browsers throw errors. Just like this: 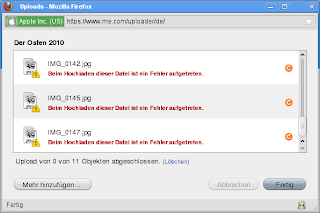 So far, I cannot find any documentation on this behaviour. I would have assumed that either FFox or Chrome would work. MobileMe on OS X says it supports FFox and Safari. But since Safari is not available on Linux, I thought I might try FFox and Chrome. Now waiting for a MobileMe chat support guy. I doubt they are educated enough to actually help me…


Update: The chat guy was friendly, and had one hint: update to FFox 3.6. I was still on 3.5. And sure enough: now the upload works. Only one file at a time, though. But I found out even more on my own. It seems all the images are accessible from your iDisk as well. They are stored in Web/Sites/_gallery/id. Where id is the number of your gallery. However, you cannot just upload pictures there. Every image needs to be put in a separate directory. Every directory must then have the following files:

For portrait, I assume that the width and height are swapped. Have not checked this yet. Later, I will try to whip up a bash or Python script which produces these files automatically from a list of input images. Let’s see if this works.

Oh yes, one more thing: In Linux you can easily mount the iDisk with “wdfs  http://idisk.me.com/your-id iDisk/
“.

Update 2: A quick check revealed that the iDisk interface is quasi read-only. Writing new albums or pictures there will not show up in the gallery itself. That would have been too nice. So I guess this is only possible via the (unpublished?) HTTP API of MobileMe itself. Just like the Picasa API for uploading and manipulating photos. But it seems the API is quite hard to decipher, which is sad, given that Google practically documents all their APIs and encourages mashups and websites using their services.
There is a nice blog post about the UI changes from Blender 2.4x to the 2.5 series. All in all I think the new UI is much improved. However some things are still not perfect. e.g. Blender windows on OS X are not resizable, apart from the zoom (+) button. That’s because the resize corner in the lower right is missing. On Linux, this will be provided by the window manager. Anyway, here is an idea of what Blender 2.5 looks like: 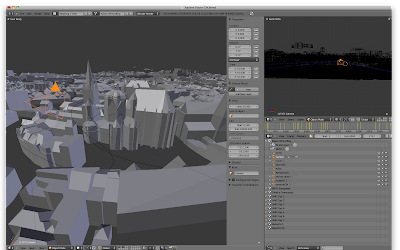 I can definitely recommend the X11 packages from the XQuartz project. They are more up to date than the X11 server shipped with OS X. Also, the Gimp packages over at Lisanet are fantastic, too. However, the default click behaviour of X11 or rather quartz-wm is not optimal, especially for the Gimp. Usually I like focus follows mouse, but for an interface like the Gimp, it does not make sense. You always inadvertendly focus on an image, that you did not want to focus. Since there is no delayed ffm mode in quartz-wm, I opted for click-to-focus instead. However, quartz-wm swallows mouse clicks on inactive windows. This is also not worthwile for the Gimp with it’s extra tool palette windows. So the soluation is: click-through combined with click-to-focus. Easy:

In newer releases you can set this also from the preferences (⌘,). If you are using the X11 version shipped with OS X, you can most probably just replace org.macosforge.xquartz.x11 with com.apple.x11.

It’s so easy to quickly code something and calculate something. The following snippet actually computes the number of possible cards in the game Tsuro. The game ships with 64 cards, but my colleague and I suspected that those were not all possible combinations (eliminating all rotational symmetries). So we did some quick calculations, and came up with 105 possible cards. So I wrote this short Python code to enumerate all possible cards then:

Update: My first algorithm was wrong. The actual number of cards is 35. It is only 105, when the numbering of the conncetion points is of interest. So here is the augmented algorithm, which outputs the 35 unique cards. The game comes with two of every card, except for 6 highly symmetric cards, which are unique in the game.

This fantastic blog entry helps you to actually use the UserInterfaceIdiom message, which is only available in iOS 3.2 and higher. This way, you can actually build a hybrid iPad / iPhone app that even runs on the original iPhone, which only comes with iOS 3.1 at best.

Ok, here is another bugger that annoyed me for quite some time: I am using Google Calendar as my main method of dealing with appointments and shared calendars. I use the mostly fabulous Apple iCal for managing those dates. However, if I create an event to be shared with several people, and I try to send an invitation to those people, this doe not work. In the event properties, I enter a list of Email adresses, hit “Send” and it never gets sent. The event is marked as “waiting for answers”, though. But that will never happen… So I have to fire up the Google Calendar website and resend the invitations manually. Bit annoying.

I haven’t found a correct problem description so far for this in the discussion boards over at Apple, but I’ll update this post if I find a bug description or some workaround. However, a preliminary search yields several problems relating to iCal and event invitations, but also with event invitations on Google calendars.